I woke up numb. And as reality set in, the tears came.

“Right this second, what bothers me the most is that I don’t understand my country.”

President Trump.
Republican Majority in the House and the Senate.
An open supreme court seat because the senate succeeded in stonewalling Obama’s appointment of Garland.

In one day we’ve validated and endorsed obstructionist politics; we’ve told the republicans it’s ok to hold the government hostage, and stonewall the President, the American people don’t care/won’t act.

In one day we’ve told every misogynist and racist that their actions and hate are not only allowable, but to be lauded; they’re presidential qualities now.

In one day the United States has halted (or started the process of reversing) ~30-50 years of social progress.

How am I supposed to be feel about this as a trans-woman who’s still homeless, and reliant on social welfare programs (e.g. Pel Grants, Medi-Cal) to survive and try and rebuild my life? It’s shown up two or three times for me already, and it’s frustrating, and then then I think about it a little bit here and there thought the day, and it becomes downright depressing..

“Oh look, another gorgeous, perfectly stealth trans woman that thinks the bigots even notice her.”

The trans woman in that selfie passes for female, 100% stealth. Full stop.

Regardless of how absurd the HB2 law in North Carolina is to most of us, it never would have actually applied to her. For her, HB2 as it exists today is literally unenforceable. For me though, it’s a very real fear/anxiety every time I use a public restroom.

Nobody would ever notice if she went in there, unless she decided to go out of her way to draw attention to herself… like taking a selfie and posting it online. And for all the “allies” out there… remember that there are always second and third order consequences.

Is the HB2 law bullshit? I sure think so. But this trans woman has now basically validated the outrage and hate of the closed minded people who think this law is necessary to help with “protecting their children.” Those people now have something to point to, they have a target, and will just be even more angry and violent about it.

Bigots won’t stop being bigots because of this selfie.

And all people, supportive of trans rights or not, that see this selfie will be just a little bit more unsure and scrutinizing of possible trans people in public.

I’ve already seen it, just shopping at Costco this afternoon.

I don’t pass perfectly like she does, and I never will. I’m 5’10” with a torso like a linebacker, square jaw, massive nose, prominent Adam’s apple, and basically flat chested even after 6 years on HRT; yay genetics. I stand out wherever I go, even when I try as much as possible to just blend in. That’s just the genetic lottery. This trans woman may have lost the “big” lottery by being born trans (and not CIS) in the first place, but she clearly won enough smaller lotteries to pass “stealth” the way she does. I lost all the genetic lotteries, and thanks to this stranger, I get to be reminded of that in public (and on Twitter, Facebook, Reddit, etc.) a little bit more than normal for a few days or weeks now.

It’s just a reminder to me that even among trans people there’s still huge variance among individuals experience.

And none of us has the right to cause extra stress or harassment for anyone else. 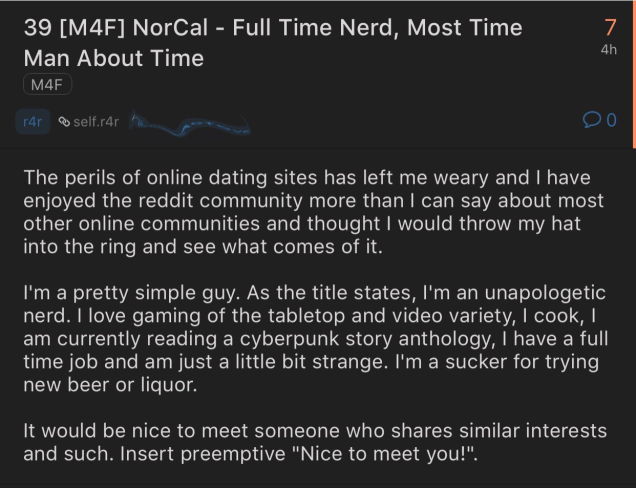 This guy sounds interesting, may as well at least say hi… 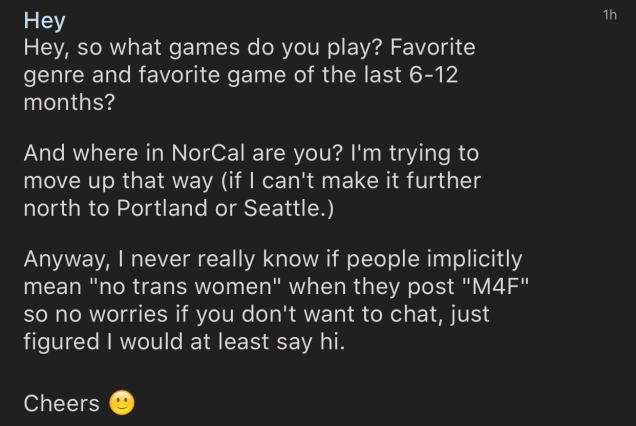 And a few minutes later that “orange red” envelope lights up…

This was a good experience, at least he had the decency to respond… Most guys never do.

I just don’t have the willpower or energy tonight to write any long, meaningful post.

I’ve been struggling with whether or not I should even write this post, because inevitably it will open me up for attack from a couple of important people in my life.

But I don’t really know if I’ve found any closure from these experiences yet; arguably not since they’re still bothering me enough today to want to write about them.

The first, is a quote from my sister, when she was 17 and I was 12, we were getting out of the car in Placerville, Ca. on our way to see our grandparents. She said to me, “you used to be one of those really cute kids, but then gosh what happened?”

As an adult now, having talked with my sister at length over the years, I know enough to think that this was the result of mis-directed anger towards our mother. At the time, I was kind of a “tag along” on what should have been a trip for just my sister, while she was on the verge of graduating high school. But at the same time, it’s hard to discount all the pain it caused, especially when I was also on the verge of beginning a very dark time in my own life.

The second, is from my old best friend, the last “words” he spoke (texted) to me before cutting me out of his life with surgical precision, “have fun being the elitist prick who’s teenage existential dilemma has gone on far too long.”

Of course the irony here is that he’s now 33, and finishing up a second (or maybe third?) college degree (financed by his parents again?) after going to college right out of high school then floundering himself for a bit, moving back home, living on his parents credit cards for a while, drinking heavily and being a groupie for a couple different bands, eventually choosing to go to culinary school, then working at his dad’s law office, being given his dad’s lexus, etc.

It makes me wonder how different my life may have been if I had been born female. Or just born to a loving/attentive mother. Or born to a financially stable family, hadn’t been physically or emotionally bullied, or homeless, or all of the other little disadvantages I had to deal with while he didn’t.

He is exactly the kind of person that doesn’t understand the advantage he had from birth.

No amount of “hard work” could have ever allowed me to recover from that big of a difference. Maybe I could have worked ten times as hard as he did, and eventually hit half the opportunity he had instead of 1/10th, but I was never going to get to his level, because the baseline security and love was never there.

It doesn’t really relate, but I guess this is as good a post as any to tell another story.

I was homeless the entire summer I was 7. I “celebrated” my eighth birthday in a strangers house, while we were house-sitting for a week between living at different campgrounds.

I didn’t find out until my twenties, that both of my aunts on my dad’s side had offered to let my brother, sister and I stay with them that summer. My mom refused their help.

I didn’t really understand until this past January that my mom refused their help because of how much she resented my dad, for a comment he made that she (my mom) “didn’t contribute to the family.”

Even knowing the why, I can’t excuse the decision. My mom was a terrible mom, there’s no excusing that kind of deliberate refusal/rejection of help for your kids.

So to bring this back to the quotes… I don’t want to keep holding on to them the way my mom has held on to hers for so long. But it’s hard to forgive and let go of the pain, especially when my day to day life is still painful.

So after two days on the whole “Facebook” topic, it’s back to complete writers block for me. Yet again this makes me feel like I’m not really a writer and probably never will be.

Yeah, today’s post is going to be depressing… That’s just how today has been.

I’m reminded today of this episode of “The Show” by ZeFrank:

And this all brings back up a recent evening with my cousin, who basically started out the night by asking me, “Do you like yourself?”

Unsurprisingly my immediate reaction was fuck no.

Who am I?
What am I good at?
Is anything I do ever going to be viable?

I don’t really have answers to those questions, and I never have.

I’m a 32 year old tranny with basically no friends, no family, no college degree, no formal training or marketable skills, and nothing to really look forward to in life.

Today that’s especially hard to cope with. Today I’m lonely, and depressed, and sad that I’m stuck in a life I don’t want, “screaming” at the top of my lungs for some kind of help, any help, but everyone just tells me to shut up.

It’s especially frustrating when someone tells me, “just get a job.” Clearly they have no idea how the job market in Southern California works. There are an extremely limited number of potential employers within walking distance of where I “live” and no viable public transportation. One of those employers is Walmart, the lowest of the low. Even Walmart won’t call me for an interview.

It’s approaching a month and a half now since I submitted my “CalFresh” (food stamps) application and social services still hasn’t responded to schedule the verification interview. And the social services office is 17 miles away, so It’s not like I can just walk there on a whim and hope someone can see me.

So back to hopelessness. I’m sure the “boot-straps” loving conservatives will tell me this is “learned helplessness” but I sure as hell don’t see what I’m supposed to do if social services won’t even help me.